In the previous post, we’ve learned what is symbolication process and why it is needed. In this post we will dive deeper and learn how to make sure a dSYM file is generated and see how we can manually use it to symbolicate crash reports.

How do I make sure dSYM is actually being generated?

XCode has several settings that may affect dSYM generation, let’s review them one by one.

First of all, let’s make sure that debug information is being generated:

Let’s instruct XCode to put the debug symbols in a separate dSYM file:

By default that option is only selected for release builds, but not for debug builds. In most cases it is enough, as most commonly debug builds are only used by the developer while debugging their own application while being attached to XCode. However when trying out symbolication or when there is a chance a debug build is going to end up on a device of a colleague who is going to test it, we may still opt to have the dSYM file to be able to analyze the crashes.

And last, but not the least important:

This option is not important for the symbolication process itself, but it is important to check it, as it instructs XCode to strip the debug symbols from the binary file itself, the file we are going to distribute to App Store. It both affects the size of the distributed application, but more importantly, leaving debug information in the application makes our competitors’ life much easier.

With all these options checked, our next build should produce a dSYM file (or rather a series of dSYM files, one for our main application and one for each framework we build as part of our application). The files are located in the products folder. Apple made it quite tricky to find it, one common method is to look at the build logs and copy the path from there. There is an alternative way through XCode: 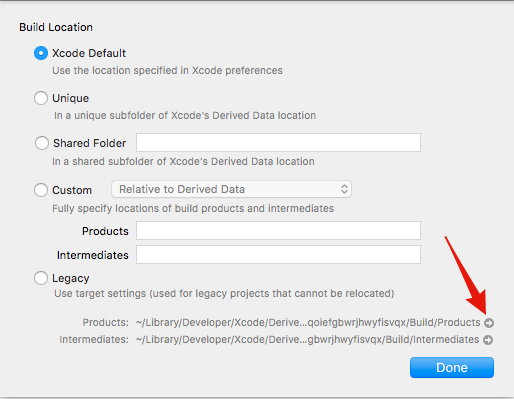 Note: XCode 8.2 was used at the time of writing the post, the options may differ in other XCode versions.

What can I do with a crash report and a dSYM file?

Let’s say we have that raw crash report with addresses and a dSYM file that we know is the matching one. What can we do with it?
The address and the dSYM file should be enough to extract debug information about that address, but there is still one element missing. We need to know the exact address that image was loaded at for that specific crash. The reason for this is operating system randomizes the offset at which programs are being loaded every time they are ran. The technique is usually called ASLR (Address Space Layout Randomization) and it is mostly done for security reasons, as it prevents exploits that rely on a specific layout of the program at runtime.

This is where the list of all the loaded images comes into play. If you are dealing with raw crash reports generated by XCode, it can be found
in the “Binary images” section of the text file.

Now that we know that at that particular run our application has been loaded at 0x10007C000, we can use the atos tool that comes with XCode to try to extract more info:

That seems to be working. But that is a lot of tedious work if we do it manually. If we want to get nice human readable snapshot of the callstack, then for each address, we have to:

When you deal with XCode raw crash reports, there is a perl script that’s shipped in one of the frameworks that can partially automate this flow.
In XCode 8.2 it can be found in:
/Applications/Xcode.app/Contents/SharedFrameworks/DVTFoundation.framework/Versions/A/Resources/symbolicatecrash
but it may vary from version to version.

Now we can try to symbolicate the whole report at once:

With this script in hand we know how to completely symbolicate one single crash. And that is assuming we got the crash report itself, all the dSYM files, all the tools and a lot of patience. In the real world however, this approach becomes impractical really quickly, as our app is deployed on thousands (hopefully millions!) of devices, all having different iOS versions and architectures. And in order to have a complete solution we have to:

In the next post of the series, we will be diving deeper into advanced topics of symbolication such as Bitcode.

Many developers use Bugsee for its great crash reporting capabilities. In fact, Bugsee crash reporting has recently been ranked the highest among all iOS crash reporting services when it comes to accuracy and the amount of details in the report. Bugsee doesn’t stop there, however, it also presents video of user actions, console logs and network traffic that preceded the crash.

In the following series of posts we are actually going to focus on the crash log itself, explain the magic behind it and show how to properly set it up.

First post in the series is an introductory one.

In order to answer that question we must briefly touch on the build process itself. Regardless of the language our project is written in (be that Objective C, Swift or any other), the build process translates our human readable code into machine binary code. Consider the following buggy code (can you spot the bug?).

After build it will eventually become this:

As you can see from this example, the build process got rid of all the symbols (variable and method names), it also doesn’t know anymore anything about the layout of our code, the amount if spaces we put to separate the functions, all that information is lost. So now when crash occurs (and it will occur, after all we access elements beyond the bounds of that array), if we don’t have symbolication properly set up, this is the only crash information we will end up with:

Symbolication is the process of translating the return addresses back into human readable method/filename and line numbers.

Successful symbolication will result in the following report instead:

Now it’s pretty obvious that crash was caused by some improper array access in line 22 of MyFile.m, which happens to be within getElementsArray method. And if we need more context, we can easily see this one was called by printAllElements at line 27 of the same file.

What is a dSYM file?

Luckily for us, XCode can be instructed to keep a lot of the data that is being lost during the build process. It can put it inside the application itself, but that is not a good idea. We do not want to ship our application with all these extra debugging information, it will make it very easy for our competitors and hackers to reverse engineer the app. We would like to have it generated, but kept out of the AppStore. That’s exactly what dSYM file is all about. During the build process, XCode strips all the debug information from the main executable file, and puts it inside a special file called dSYM. This helps to keep our executable small and easier to distribute to happy customers.

If our application is using frameworks, the product folder will have a separate dSYM file generated for each framework built. Eventually all of them are needed if we want to cover our bases and be able to symbolicate a crash in every possible location in our app.

Needless to say, a dSYM file generated while building a specific version of the application can only be used to symbolicate crashes from that specific version only.
dSYM files are identified by a Unique ID (UUID), which changes every time we modify and rebuild our code, and that ID is what is used to match a symbol file to a specific crash. A dSYM may be associated with more than one UUID, as it may contain debug information for more than one architecture.

The UUID of a dSYM can be easily retrieved using the dwarfdump command:

The dSYM above has debug information for both arm7 and arm64 flavors of our application, each flavor has its own UUID.

These dSYM files can and should be manually stored for future symbolication of the crashes in the production build. Alternatively they can be uploaded to a crash reporting service like Bugsee, where they will be put in a vault and will get eventually used for processing a crash for that specific build. Typically, a special build phase is added to the build process that is responsible for uploading dSYM files to the vault.

What happens during iOS crash?

During crash the following information is being collected on the device:

This information is sent for processing to the crash reporting service, where it will be matched with proper dSYM files that were already uploaded at build time, or will be uploaded manually at a later time. The symbolication process happens on the server and produces a nice, human readable crash report that can either be viewed through a web dashboard or downloaded as a file. The report will typically include the items listed above (basic info, crash/exception details and symbolicated stack trace if all the stars are aligned and all symbol files were properly uploaded and processed.

That is what a typical crash reporting service provides. Bugsee provides much more than that, to name a few, with Bugsee, these reports also include an interactive player that can play in a synchronized manner the following:

This gives much more context that is of tremendous help when trying to debug an evasive issue that is only happening for customers in the field.

In the next post of the series, we are diving deeper into symbolication process itself, and show how to manually symbolicate an address or a full Apple crash report.